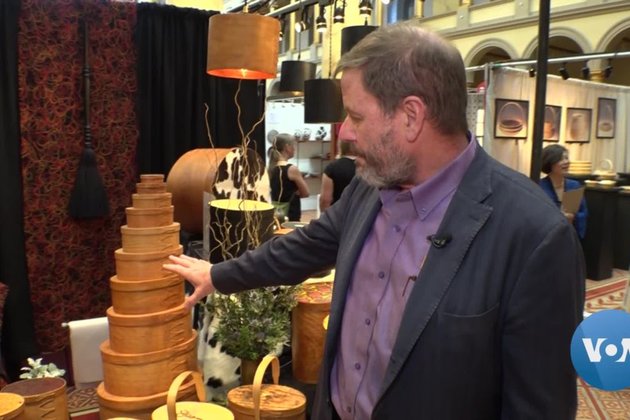 WASHINGTON - More than one million plant and animal species are likely to become extinct due to human activity, according to a new report by the United Nations.

That threat to Mother Earth and other climate change concerns inspired folks at Washington's recent Smithsonian Craft Show -- one of the most prestigious events of its kind in America -- to highlight and reward artists who are creating environmentally sustainable work.

Art that's good for the planet

In recent years we've noticed that the artists in our shows have been working with more renewable materials and methods that are environmentally safe, said JoAnn Symons, president of the Smithsonian Womens Committee. So weve decided we would reward those efforts by offering the Sustainability Award every year in our show.

In this year's show, 120 crafters from across the country presented art in 12 different media, from basketry, leather and glass, to ceramics, wood and decorative fiber.

Twenty-one of them met the sustainability criteria and were eligible to compete for the Honoring the Future Sustainability Award, which included a cash prize of $1,000.

Michigan woodworker John Guertin is one of the artists who met the requirements.

Each of his painstakingly crafted birdhouses is made with wood he recovers from the remains of old barns that have fallen into disrepair.

If you can use recycled material from old sources to bring new generations of birds into the world -- and other creatures -- it makes a wonderful statement about our purpose in the world, that we dont just exploit it, but rather we give something back, he explained.

Many of his creations, which include homes for bats and owls, have a Victorian theme. Former President Gerald Ford commissioned a birdhouse with a stars and stripes theme. Other boxes are replicas of real buildings, including one created for the Mission San Luis Rey Museum in Oceanside, California, which resembles the Spanish-style building. If you look at the real design of the mission, it has a rose window exactly in the position perfect for a birdhouse, Guertin pointed out.

His artistic goal is simple.

Make collectible bird houses that are functional, architectural and scientific works that will serve the needs of songbirds and other cavity-nesting species such as owls and bats, that will hopefully make some small impact on the environment, he said.

Shes a mix of new and reclaimed fabrics, says Mimi Kirchner, as she holds up a cloth dog doll that's sporting a mustard-colored cashmere scarf and a tiny matching felt satchel filled with shreds of recycled paper.

The Massachusetts artist qualified for the sustainability category because she makes art toys made out of used and rescued fabrics. They come from thrift stores, and peoples collections, she explained, so a lot of it is vintage, and I give it a new life.

I have always been most interested in depictions of people - in any art, she once wrote on her blog. Painting, sculpture, life-drawing.

Those elements come together nicely in her work, whether shes making one-of-a-kind animal characters, whimsical people figures, or intricate Tiny World pin cushions which fit perfectly into a tea cup.

Tim Arnold's wooden boxes are inspired by the Shakers, a religious group known for its sturdy and simply designed furniture.

'These are items that the Shakers used to store dry goods back in the 19th century, he said, pointing to a collection of oval boxes made with thin, light-colored wood. Similar to modern-day Tupperware sets, the Shakers also produced boxed sets 'to sell to what they referred to as the world, which was everybody outside their communities,' Arnold said.

The Nashville, Tennessee artist says he tries to honor that tradition, but at the same time, interject a little bit of my own personality into some of the boxes, particularly on the tops.

Arnold adds to those tops some interesting objects, like a pair of magnetized scissors for a box designed for sewing, and uses unusual materials, like exotic wood, copper and animal skins.

I'm buying python skins from the bounty hunters that are trying to eradicate the pythons in the Everglades, he said, which makes him feel part of the solution to a huge python crisis in that area of Florida.

She won the Honoring the Future Sustainability Award for her stylish silks, which she makes by hand using leftover materials from bolts of fabric, and past projects. Those repurposed products include custom cut and hand-dyed cotton shirt dresses, accordion scarves, and coats and jackets with 3D textures and hand-dyed Shibori patterns.

When I look at these beautiful silks that I've acquired over the years of designing, I wanted to repurpose them into something that was truly beautiful, but completely different than the original product that I purchased them originally to construct, she said.

The award comes from Honoring Our Future, a nonprofit organization that was launched to harness the power of art to educate and engage the public on climate change, says its director, Fran Dubrowski.

Were trying to encourage the craft artist to really discuss sustainability with the visitors to their show, not just practice it at home, she said. They're in constant contact with the public, and I think they can be wonderful ambassadors for climate education.