Goaltending in turmoil as Buffalo prepares to face Predators 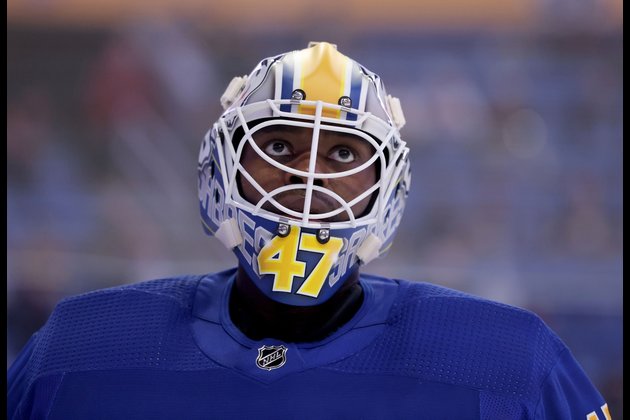 A tough season for the Buffalo Sabres isn't getting any easier.

Mired in a six-game winless streak (0-4-2), the Sabres take a hard-hit goaltending roster into a matchup against the host Nashville Predators on Thursday.

Already without Craig Anderson and Dustin Tokarski, the Sabres lost goaliesUkko-Pekka Luukkonen and Malcolm Subban to injury in a 6-1 loss to the Tampa Bay Lightning on Tuesday. Luukkonen (lower body) is week to week while Subban (upper body) is month to month.

Buffalo will go with a tandem of Aaron Dell and Michael Houser for the foreseeable future. Dell is expected to get the start against Nashville.

Dell struggled in his last stint in Buffalo, going 0-5-0 in seven appearances with a 4.52 goals-against average and .872 save percentage. Houser had been on an AHL contract in the Sabres organization and signed with the NHL club on Wednesday. The 29-year-old performed admirably in four NHL appearances last season, winning his first two NHL games -- both against the New York Islanders.

"Houser was an inspiration last year and did exceptionally well," Granato said. "He's an overachiever and that's exactly what we're about right now and what we need. So that's a fit. And Dell, I got to see Dell play a great game in Rochester last Friday that he looked like a different guy. ...

"He struggled early. There's no question. But I think he is better than he showed and he's shown going to Rochester that he looks like a different guy. He even looked like a different guy at practice. So, the hope is that that's the case, that he's feeling a little bit better about his game and comfortable and confident. And we'll see."

In a sliver of good news for the Sabres, forwards Alex Tuch and Kyle Okposo are expected to return after being cleared from COVID-19 protocol. Defenseman Robert Hagg, who has missed seven games with a lower-body injury will also be back in the lineup.

The Predators have won five in a row, most recently gutting out a 5-4 overtime win against the Colorado Avalanche in which the Predators had their lead erased three times.

They've outscored their opponents 22-11 during the win streak, holding them to two goals or less in the first four wins.

"We're finding ways to win different games of all different types," Matt Duchene said. "I mean, you play a game against Arizona (on Saturday), that's a very different game than tonight, and you win both games and you take care of business. I think just our ability to stay even keel no matter what the game, no matter what other teams throw at us ... we're just level the whole time."

Duchene scored the overtime winner against Colorado, his second goal of the game. The 30-year-old has been enjoying a bounce-back season following an output of 13 points in 34 games last season. He leads the Predators with 16 goals, while his 33 points lead all Predators forwards and ranks second on the team behind captain Roman Josi.