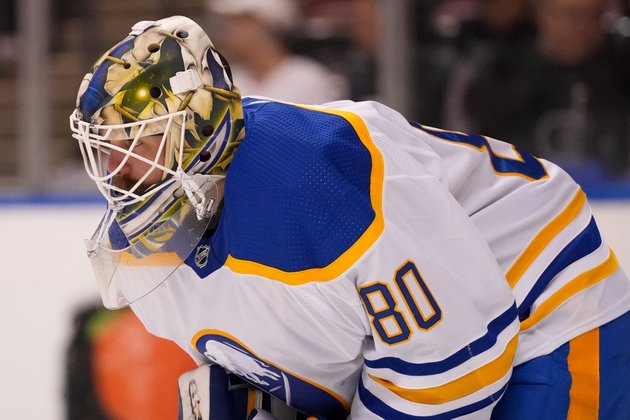 Jeff Skinner scored twice and the visiting Buffalo Sabres snapped a six-game losing streak with a 4-1 win against the Nashville Predators on Thursday.

Mark Jankowski and Vinnie Hinostroza also scored for Buffalo, which was 0-4-2 during its skid. Aaron Dell made 29 saves for his first win of the season (1-5-0).

Matt Duchene scored and Juuse Saros made 17 saves for the Predators, whose five-game winning streak came to an end.

Jankowski benefitted from a miscue by the Predators to give Buffalo a 1-0 lead at 5:30 of the first period. Jankowski, in the slot, tipped Mark Pysyk's point shot toward the net where Nashville defenseman Matt Benning's attempt to clear inadvertently pushed the puck under Saros' right pad into the net.

Pysyk's assist was the 100th point of his NHL career.

The Predators appeared to tie it 1-1 on a delayed penalty to the Sabres 42 seconds into the second period on Colton Sissons' shot from the top of the right circle but the Sabres challenged for offside and the goal was overturned after video review.

Nashville pressed in the second period, holding a 7-1 shot advantage nearly halfway through the middle frame.

The home side finally got on the board on the power play at 13:12. Dell made the initial save on Roman Josi's shot but the rebound bounced into traffic in the slot, where Duchene got his stick on it to tie it 1-1 with his team-leading 17th goal of the season.

The Predators nearly took a lead less than two minutes later when a shot from the slot bounced up in the air around the net but Dell was quick to jump on the loose puck when it landed to the left of the net.

Skinner gave the Sabres a 2-1 lead on the power play at 18:18 of the second, lifting a rebound from in front over Saros. He extended it to 3-1 on a breakaway at 7:59 of the third period.