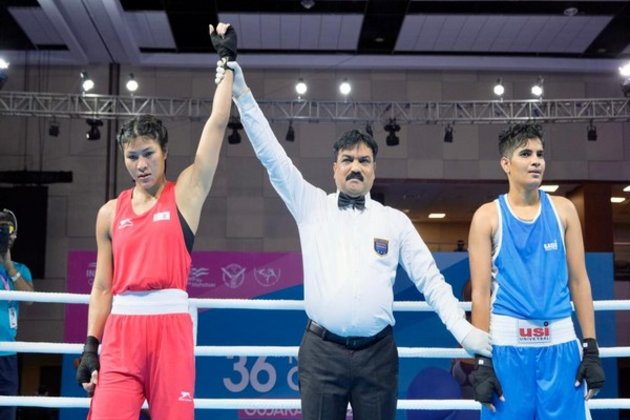 Gandhinagar (Gujarat) [India], October 7 (ANI): World Championship bronze medallist Jamuna Boro of Assam came up with an inspiring 5-0 win over lesser-known Nirmal of Nagaland to open her campaign in style in the Women's 57kg weight division at the 36th National Games here on Thursday.Her state-mate and former World Youth champion Ankushita Boro also advanced to the next round after recording an RSC win over Telangana's Niharika Gonella in the Women's 66kg preliminary contest.Jamuna lit up the boxing ring in the opening bout of the day with a flurry of punches to unsettle the Nagaland pugilist early on, before banking on her swift movements to get the opponent to her knees."It went on expected lines, I wanted to get to a decent start in the competition, and live up to expectations. The going isn't easy, as there are many good boxers in my category," she said.Ankushita's combination punches were too hot to handle for the Telangana boxer, who got as many as four standing counts of eight, before the referee decided to stop the bout with minutes to go for the end of the final round."I have played a lot against her, and on most occasions, defeated her. Today, she went on the aggressive but that backfired for her, as I wanted to play the waiting game," Ankushita said.

In another welter-weight contest, local girl Paramjit Kaur registered a dominating RSC win over Tamil Nadu's S Pragathi, who braved a standing count of eight from the referee in the second round, to continue the contest. Eventually, Paramjit made it an effortless outing to ensure her smooth sailing into the next round.In other women's matches, Rajasthan's Sapna Sharma (57kg), Haryana's Poonam (57kg), Manipur's Samim Band Khulakpham (57kg), Rajasthan's Lalita (66kg) and Anjali Tushir (66kg) of Delhi, registered wins.Among the men, Haryana's Sagar lived up to his billing by getting rid of Pondicherry's Prabaran by RSC in the third round of the welterweight 67kg division. In other contests, Himachal Pradesh's Chander Mohan (67kg), Karnataka's Rayyan MD (67kg), Buntee Singh of Delhi (75kg) registered victories.Telangana's Parvesh Musharaf got the better of Assam's Bastab Chetia in the Men's Heavyweight 92kg category while Punjab's Kanwarpreet Singh also advanced after receiving a walkover from home boxer Rizwan Nisar Ahmed. In the Super Heavyweight category, Assam's Roshan Sonar went down to Reynold Joseph of Maharashtra.(ANI)