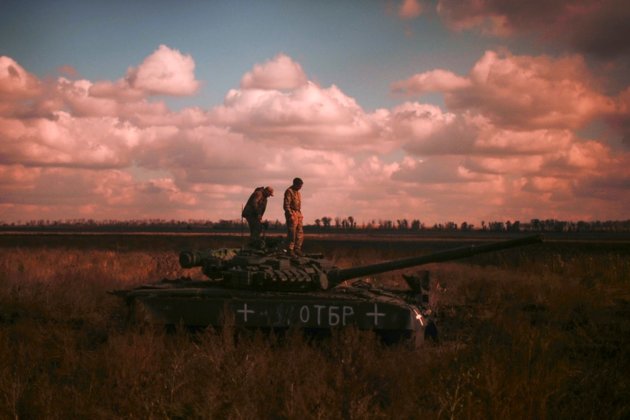 The risk of Armageddon is the highest it has been since the early 1960s, President Joe Biden said at a fundraiser in New York, as Russian losses in Ukraine prompt Russian officials to discuss the possible use of tactical nuclear weapons.

'I don't think there's any such thing as the ability to easily [use] a tactical nuclear weapon and not end up with Armageddon," Biden said.

"We have not faced the prospect of Armageddon since Kennedy and the Cuban Missile Crisis," he continued. In October 1962 the U.S. and the Soviet Union were seemingly on the verge of a nuclear conflict after the U.S. deployment of ballistic missiles in Turkey and Italy were countered by the Soviet deployment of similar missiles in Cuba.

The URL has been copied to your clipboard

The president said that Russian President Vladimir Putin, "a guy I know fairly well," is not joking when he talks of using "nuclear or biological or chemical weapons."

Speaking to Democratic donors, Biden said he and U.S. officials were still "trying to figure out Putin's off-ramp" in Ukraine.

Following Biden's comments Thursday night, the White House said Friday the U.S. sees no reason to change its nuclear posture and does not have indications that Russia is imminently preparing to use nuclear weapons.

'He was reinforcing what we have been saying, which is how seriously ... we take these threats,' from Russia, White House spokesperson Karine Jean-Pierre told reporters on Air Force One when asked about Biden's comments.

The president reiterated the U.S. would continue to support Ukraine.

Putin turned 70 Friday amid ingratiating congratulations from his inner circle and a plea from Orthodox Patriarch Kirill for all to pray for the health of the longest-serving paramount leader of Russia since Josef Stalin. Putin is grappling, however, with the gravest domestic crisis of his 23-year rule. Continuing battlefield defeats in Ukraine have increased dissent inside the Russian elite, while hundreds of thousands of Russians are fleeing his mobilization order.

Meanwhile, jailed Belarusian activist Ales Bialiatski, Russian organization Memorial and Ukrainian group Center for Civil Liberties were awarded the 2022 Nobel Peace Prize. According to the Norwegian Nobel Committee, "The peace prize laureates represent civil society in their home countries. ... They have made an outstanding effort to document war crimes, human right abuses and the abuse of power."

The prize is seen by many as a condemnation of Putin and Belarusian President Alexander Lukashenko.

EU leaders meeting Friday in Prague want to lower natural gas prices before winter sets in, but political discussions on how to go about it are getting tangled amid differing proposals. European Commission President Ursula von der Leyen on Wednesday suggested gas price cap options for the EU leaders to discuss, after France, Italy, Poland and 12 other countries urged Brussels to propose an EU-wide gas price cap to contain inflation.

Other countries are opposed - among them Germany, Europe's biggest gas buyer, and the Netherlands - and they insist capping prices could cause demand for gas to rise or leave countries struggling to attract supply from global markets.

There's precious little time left to figure it out before temperatures drop: Heating season began on October 1, and gas in Europe is still trading at an eye-watering 175 euro per megawatt-hour. That's nearly four times higher than a year ago - and more than 11 times the price in 2020.

Britain's defense ministry said in an intelligence update posted on Twitter Friday that "Re-purposed captured Russian equipment makes up a large proportion of Ukraine's military hardware. Ukraine has likely captured at least 440 Russian Main Battle Tanks, and around 650 other armored vehicles since the invasion. Over half of Ukraine's currently fielded tank fleet potentially consists of captured vehicles."

The update said, "The failure of Russian crews to destroy intact equipment before withdrawing or surrendering highlights their poor state of training and low levels of battle discipline. With Russian formations under severe strain in several sectors and increasingly demoralized troops, Russia will likely continue to lose heavy weaponry."

Ukrainian President Voldymyr Zelenskyy said in his daily address Thursday that "Since the beginning of October, more than half a thousand square kilometers have been liberated from the Russian occupiers in the Kherson region alone."

Oleksandr Starukh, the governor of the Zaporizhzhia region, posted on Telegram that five other people were trapped in rubble following the attack.

A journalist takes photographs atop of a destroyed Russian tank in Chystovodivka village, Ukraine, Oct. 6, 2022.

Ukraine controls the city, but the Zaporizhzhia region is mostly occupied by Russia.

Russian President Vladimir Putin signed a law Wednesday declaring Russia was annexing Zaporizhzhia and three other regions, a move denounced by Ukraine and its Western partners, as well as the United Nations, as a violation of international law.

Zaporizhzhia is home to Europe's largest nuclear power plant and shelling in the area in recent months has raised international fears of a nuclear disaster.

Rafael Grossi, the head of the U.N.'s atomic energy agency, is due to visit Kyiv and Moscow this week for what he said would be important meetings. He said Wednesday that the need for a protective zone around the power plant is "now more urgent than ever."

Ukrainian President Volodymyr Zelenskyy said in his nightly address Wednesday that his forces had recaptured Novovoskrysenske, Novohryhorivka and Petropavlivka, three villages in the Kherson region that was also a part of Russia's annexation claims.

The gains add to Ukraine's recent successes in reclaiming territory from Russia in the northeastern and southern parts of the country.

Zelenskyy said in his address that Putin has "already lost," calling the war the Russian leader launched in late February "self-destruction of your nation's every prospect."

"Ukrainians know what they fight for," Zelenskyy said. "And more and more Russian citizens realize that they must die simply because one single man does not want to stop the war."

The head of the U.S. Agency for International Development, Samantha Power, arrived in Kyiv on Thursday for what the agency said was a visit to meet with government officials, farmers, journalists, entrepreneurs and energy workers to discuss how to more effectively assist the Ukrainian people.

"It is a critical moment for the Ukrainian people as they defend their freedom from brutal attack, liberate occupied land, prepare for winter, and strengthen democratic institutions & the rule of law," Power tweeted.

Some information for this story came from The Associated Press, Agence France-Presse and Reuters.