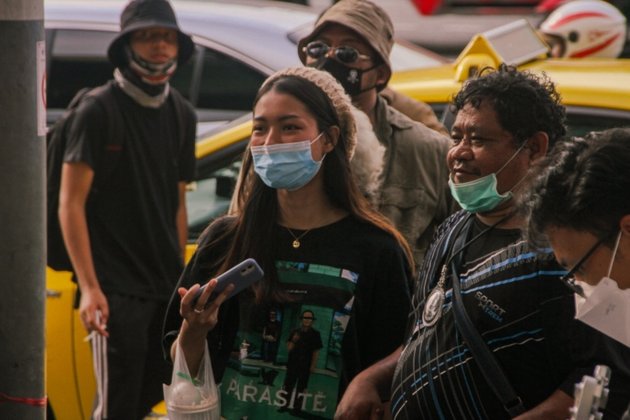 Bangkok - For Chalini Thongyot, witnessing the mass arrest of protesters in Thailand during anti-government demonstrations was a turning point.

At the time, Thongyot was helping the activist group Umne of Anarchy manage its social media platforms and live stream protests taking place across Thailand.

The protests, which started in 2020, regularly ended in clashes, with police using rubber bullets, pepper spray and water cannons, and arresting hundreds of protesters.

Seeing the police response to those protesting government policy or demanding reform of the monarchy sealed Thongyot's decision to be a journalist.

"At that time, I just think this duty is the most suitable for me because I was the one who was producing social media, live broadcasts," Thongyot told VOA in Bangkok.

The 23-year-old is now part of Thalufah, an organization that grew out of the protest movement and straddles journalism and activism.

In January 2021, Thongyot joined a march to raise awareness on environmental issues. The march traveled from the city of Khon Kaen to the capital Bangkok - some 440 kilometers (273 miles).

By the time they reached Bangkok in April, a new group had formed.

"It was quite a big campaign. People that joined the activist group during this time, they just gained the name Thalufah because of that event," Thongyot said.

Thalufah, which partly translates to "breakthrough to the sky," now has around 50 staff and four departments, including eight content producers and three reporters - including Thongyot.

The group's mission is to see Prayut Chan-Ocha removed as prime minister, Thailand's constitution to be rewritten and the monarchy reformed.

In a country where media largely toe the official line, Thalufah represents a change in new media, with activist journalism groups finding new platforms to allow opposition voices a space.

But reporting in Thailand is not without risk.

In its assessment of Thailand's media environment, watchdog Reporters Without Borders (RSF) says journalists who try to offer an alternative voice risk harassment.

Overall, RSF ranks Thailand 115 out of 180 on its Press Freedom Index, where 1 marks the country with the best conditions for media.

During the pandemic, Thai authorities imposed emergency decrees including a curfew and an order banning the publishing or broadcasting news and information that could incite "public fear."

It also proposed a regulation that would allow the government wide powers to block content deemed a danger to public order. But a court later blocked that plan.

"Authorities also don't recognize them as press, resulting in legal harassment. Some of them were arrested, taken as protesters. Some got sued by lese-majeste law," she told VOA, referring to Thailand's strict laws against insulting the royal family.

"Economically, they face financial crisis, especially after the protest movement's popularity has been declin[ing]. Some of them relied on donations and now [are] seeking for other ways of funding themselves," she told VOA.

In Thalufah's case, the group is funded by international organizations and public donations.

Phansasiri Kularb, a journalism lecturer at Chulalongkorn University in Bangkok, sees citizen journalism as essential to holding those in power to account.

"The presence of citizen journalists in political protests is essential, especially in cases where clashes between police and protesters occur," she told VOA via email.

But, the lecturer added, it's not just issues with the authorities. Peers in the mainstream media do not always recognize citizen journalists.

"When the anti-government protests grew larger and more frequent in late 2020, journalists' professional associations did not include citizen journalists as members of their organizations and did not give them the press insignia for covering protests," Kularb said.

"As such, alternative outlets and citizen reporters teamed up to form their own association and create their own badges to identify themselves as press in the field," she said.

One such group is the Thai Media for Democracy Alliance. This group acts as an association for independent media and provides them with the media armband used as a form of press identification in Thailand.

In August 2021, authorities arrested 31 of Thalufah's team, including Thongyot, for alleged extortion of an official and breaking an emergency decree following a protest in Bangkok.

They were detained overnight before a court granted bail the next day, according to the Thai Lawyers for Human Rights. Thongyot says the case against her was eventually dropped.

The following month, police approached Thongyot again during a demonstration in front of Government House in Bangkok, but they were called away before any action was taken, she said.

Thongyot admits that Thalufah still leans more toward activism than journalism, which may be why authorities harass them.

The split is "about 60-40%," she said. "Media is a small portion because staff who are at Thalufah are being activists more than journalists."

The group currently publishes on social media. But Thalufah is developing a website and plans to apply to be a part of the Thai Journalists Association.

For Thongyot, the switch to journalism is still relatively new, but one she is committed to.