Erdogan Works to Deepen Ties With Putin Amid Allies' Concerns 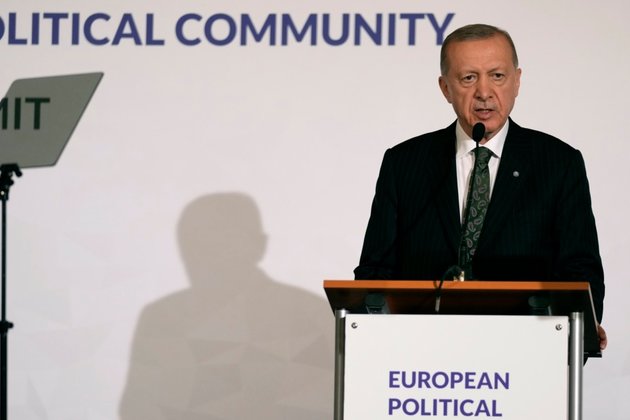 Istanbul - Turkish President Recep Tayyip Erdogan Friday held talks by phone with his Russian counterpart, Vladimir Putin, to deepen relations. The talks are seen as likely to add to growing concerns among some of Turkey's NATO partners over its relationship with Moscow and where its loyalties lie.

The phone call was announced in a press statement by Erdogan's office.

It said the Turkish president reiterated his willingness to work toward a peaceful settlement of the conflict in Ukraine. The conversation came after Erdogan's three face-to-face meetings with Putin in the past few months.

The Turkish leader's efforts to deepen ties, including his refusal to enforce Western sanctions against Russia, have spurred growing questions about Turkey's commitment to its Western partners and NATO.

But Turkish presidential adviser Mesut Casin, who is also a professor at Istanbul's Yeditepe University, said such talks are normal between neighbors.

"Turkey is a NATO member and will continue to be so and this is very critical for Turkey," he said. "The NATO alliance is one thing and Turkey's relation with Russia is something else. They need to be seen as two separate things. Russia is our neighbor and we need maintain good ties. Turkey's neutrality policy over Ukraine is to the benefit of NATO."

Ankara insists it also maintains close ties with Ukraine, to which it continues to supply military hardware, including drones. Such contacts with Moscow and Kyiv, Erdogan claims, allowed him to successfully assist the United Nations in brokering a deal to enable Russian-blockaded Ukrainian grain to reach world markets. That deal comes up for renewal in November.

But Western concerns, especially over deepening Turkish-Russian financial ties, are growing. Under the threat of U.S. secondary sanctions, Turkish banks withdrew from Russia's Mir payment system last month. Moscow was using the system to circumvent a ban on Russian use of international credit cards. But analysts say Ankara retains leverage over its Western allies, with Turkey's permission required to allow Sweden and Finland to join NATO. On Thursday, Erdogan renewed his threat Thursday to block Sweden's bid.

'As long as terrorist organizations demonstrate on Swedish streets and terrorists are present in their parliament, our approach to the issue will not be positive,' the Turkish leader told reporters.

Erdogan accuses Stockholm of offering sanctuary to Kurdish separatists fighting the Turkish state and an organization that Ankara blames for carrying out the failed 2016 military coup. Sweden denies the charges. But some observers say Turkey's stance will likely only add to questions on whether Ankara is doing Moscow's bidding.

Asli Aydintasbas, a visiting scholar with the Washington-based Brookings Institution, said the West will need to get used to a more assertive Turkey.

"The dynamics have changed," she said. "Turkey no longer feels a strong and firm member of the Western camp or NATO alliance. It is still NATO, but obviously also interested in having alternatives. And Turkey is also a whole lot more self-confident than it used to be."

With Turkey geographically close to Russia, Ukraine, and other hotspots like Iran and Syria, observers say Erdogan is aware of his country's strategic importance and Western allies' need for its continued cooperation.