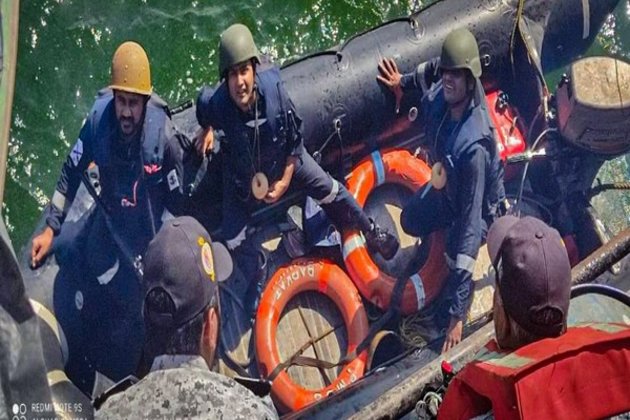 Karachi [Pakistan], October 7 (ANI): Pakistan Maritime Security Agency (PMSA) ship rescued six Indian fishermen who were drowning near the international maritime boundary line between India and Pakistan and were handed over to the Indian Coastal Gaurd ship operating in the area, PMSA said.

PMSA in a tweet wrote, "During routine patrolling in Eastern maritime region, PMSA ship rescued 6 Indian fishermen who were drowning close to Int'l Maritime Boundary Line b/w INDPAK."PMSA Ship provided first aid and food to fishermen thus helping to stabilise their physical condition, it said and added that later, the rescued fishermen were handed over to ICG ship operating in the area. The humanitarian gesture of PMSA ship was appreciated by the rescued fishermen as well as by Indian Coastal Guard.

Moreover, Pakistan on June 20 released 20 Indian fishermen through the Attari Wagah Border as a goodwill gesture. The fishermen, who had entered the Pakistani waters unknowingly, were released after spending four years in prison.

Speaking to ANI, a fisherman named Kanji said, "We were caught in the sea in our own area. The speedboat started firing as it came and caught me for crossing the border.""I am coming back home after four years and looking forward to home-cooked meals as we used to cook our own food in prison," he added.Another fisherman Akil said he was caught while finding his net in the sea and never realised that he crossed the borders, adding that he is now happy to be back in his homeland as he hailed the Modi government.

The fishermen who were released are Gujarat natives who were caught in different groups on October 2 and May 18 respectively, following which a judicial trial took place and they were sentenced to four years in prison.The release took place after immigration authorities carried out the required formalities, post which the Gujarat police came and took them under a safeguard towards their native places. (ANI)