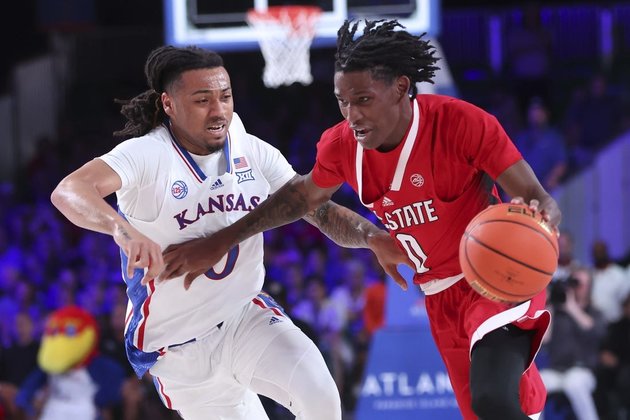 North Carolina State's first major test of the season came with a loss but plenty of encouraging developments.

The key for the Wolfpack will be to take the next steps when facing Dayton on Thursday in a consolation-round game of the Battle 4 Atlantis in Paradise Island, Bahamas.

NC State fell 80-74 to No. 3 Kansas on Wednesday in a first-round tournament game.

"A lot to build on, a lot to move on for," Wolfpack coach Kevin Keatts said. "We're going to build from this. Anytime you have your first loss, it's something to deal with. We've got to shake it off and in 24 hours play another good team."

"I feel like this team is just together," Wolfpack guard Terquavion Smith said.

Keatts added, "We were encouraged. We were right there to be successful."

NC State guards Smith, Jarkel Joiner and Casey Morsell were huge factors against Kansas. That performance could set the foundation for better times ahead.

"We can put a lot of pressure on you," Keatts said. "I think our backcourt is really good and talented and I think they're only going to get better the more they get the chance to play with each other."

Dayton (3-2) was involved in a tight game as well on Wednesday, taking a 43-42 loss to unbeaten Wisconsin.

Fixing offensive shortfalls is something the Flyers need to address as they failed to exceed the 60-point mark for the third consecutive game.

"It comes down to being able to make shots, and we weren't able to do that consistently enough," Dayton coach Anthony Grant said of the Wednesday result. "But our defense was outstanding."

The Flyers, who are the preseason favorites in the Atlantic 10, had only five players score on Wednesday, with guard Kobe Elvis' 16 points leading the way. Elvis shot 7-for-17 from the field, while the team's other starters combined to go 6-for-23.

Elvis and starting forward Toumani Camara both played 38 minutes in the Wisconsin game, so that could be a factor given NC State's preference to apply full-court pressure.

"We didn't necessarily have great ball security (against Wisconsin)," Grant said. "Seventeen turnovers in the game were costly."

TOKYO, Japan: Japanese prosecutors raided the headquarters of advertising company Dentsu, as part of a widening investigation into corruption during ...

NEW YORK, New York - Concern about the spreading of Covid-19 across China kept investors on edge Monday, with all ...

LONDON, England: The UK National Crime Agency has obtained a civil recovery order for some $65 million of suspected criminal ...

Stocks markets across Asia Pacific rattled by protests in China

WASHINGTON D.C.: The U.S. is banning the importation of all communications equipment made by Chinese companies Huawei and ZTE, citing ...